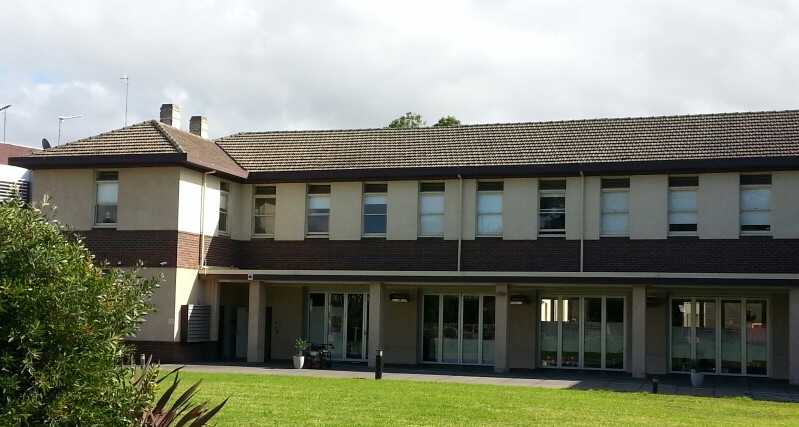 Plenty Hospital specialised in treating elderly patients with chronic mental ill health. It occupied the area south and west of the current roundabout on Gresswell Rd and Main Drive (formerly Wattle Ave), in the north of the Mont Park Asylum complex.

Plenty Hospital utilised some of the very first buildings erected on the Mont Park site, and two of these structures still remain in the Springthorpe Estate – now refurbished as units. They were the Plenty Ward D, the former Plenty Female Convalescent Ward built in 1939 (now Kingsbury Gardens, Main Drive) [see above photograph] and Plenty Wards E and F, now units opposite Kingsbury Gardens but facing onto Ernest Jones Drive. 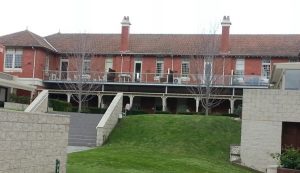 Plenty Wards E and F were built in 1913 as the Laundry Workers Wards and the Laundry, later becoming the Plenty Hospital Kitchen (1957). 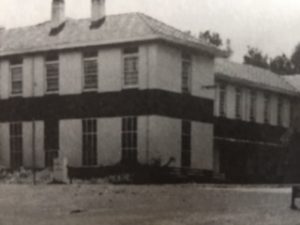 The Laundry Workers Wards E and F were immediately taken over by the Military in 1915 for accommodation for ‘shell-shocked’ World War I veterans, and designated No. 14 Australian Auxiliary Hospital. These ex- soldiers were then relocated in 1917 to the Mont Park ‘Chronic Block’ – the phalanx shaped complex of twelve Wards off Terrace Way, near the Springthorpe Playground.

By 1920 more Military Wards were built at the Plenty Hospital site. These would later be used as Plenty Wards C and R, the Plenty Main Block for women. (See the sketched map from about 1990.) 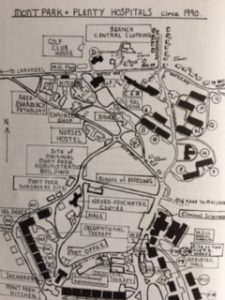 By 1952 the Laundry Workers Block/Wards E and F had 110 female patients. 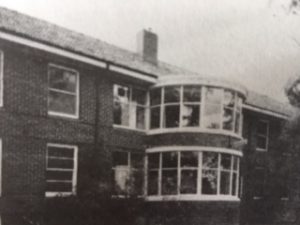 In 1958, a new style of concrete veneer construction was used to build six Wards – A, B, N, O, P, and Q. Dr Cunningham Dax had persuaded the Government, when funds became limited, to build these Wards converting the current design for state school buildings. 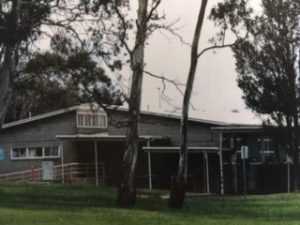 These were all similar in size and floor plan and sat in a parallel configuration off, what is now Springthorpe Boulevard. See the aerial photograph of the Plenty Hospital site, with the Gresswell Hill Tank obvious in the top corner. The arrows in the lower part of this photograph point out the location of the railway line.

Up until 1964 a railway branch line ran from Macleod station into the Mont Park Plenty Hospital area. It ended where the now Ernest Jones Reserve sits at the top of Cascade Park. This was a very busy part of the Plenty complex, with the Administration Building south of the railway siding, the Central Clothing manufacturing  building off Wattle Ave near Ward D, and the Pharmacy and Pathology area a little further west. The Medical Officer’s flat was near here and used by the doctor who was on-call at night for the Mont Park and Plenty Hospitals.  Many staff residences were clustered along north Gresswell Rd, west of the Gresswell Hill Tank.

By 1959 the Plenty Hospital site had 500 beds. The Mont Park, Larundel, Plenty complex patient population had risen to a total of about 1500 In-Patients by 1963, with each location having a mixture of acute and extended care wards, Plenty having many long term patients.

Plenty Hospital was gazetted as a separate institution in 1963 with 12 wards and Dr G.L. Rollo was the Acting Psychiatrist Superintendent, after Dr A. Arnaud Reid (the Psychiatrist Superintendent) had helped establish the facility. There were six wards for 237 men and six wards for the 237 women. Only three of these wards were locked, to prevent these elderly patients from wandering.

In 1964 Dr H.S. Paull became the Psychchiatric Superintendent and worked here until 1984. Most patients were long-stay and there was a great need for more and more geriatric wards. Some of the women patients could go home to be cared for by relatives, and some of the patients lived together in the community on Trial Leave, supported by nurses, utilising their combined ‘Invalid Pensions’ funds.

At the Hospital, rehabilitation was emphasised and social functions included dances, sports events, film nights and card games. Volunteers began to help more and more with these important activities as the years progressed. Chaplains were appointed and participated in many and varied counselling roles.

Only four Doctors were employed, so many duties fell to the inadequate number of male and female nurses, 60 – 75% of whom were untrained. Carpenters, painters, plumbers, gardeners and other tradesmen were usually supplied from the Mont Park campus. 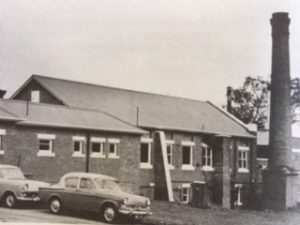 Patients were encouraged to undertake cooking classes, woodwork and gardening, as well as the paid VATMI (Victorian Aid for the Mentally Ill) work. This was mainly repetitive assembly and packing work done by the younger patients. Occupational Therapists supervised the VATMI activities so they were very busy. Screen printing was a characteristic program of Plenty Hospital, producing amongst other things 15, 000 Christmas Cards in 1965.

Many of the Plenty patients were over 55 years old, and 20% were over 65 years. These latter were generally in poor health physically, as well as suffering mental deterioration.

By 1965 Plenty Hospital was administered as both a ‘Mental Hospital’ with about 500 long term patients, and a separate ‘Psychiatric Hospital’ for acutely ill patients. Wards G, S and T were added in 1967 providing more ‘closed wards’. In 1971 the Psychiatric Hospital was utilising Wards C and R for about 55 acute patients and there were about 250 patients under care out in the community. Nurses and Social Workers kept these Out-Patients under review.

Nurses were required to do many hours of overtime to cover their duties. Occupational Therapy, Social Work, Nursing and Theology students helped with the workload as they furthered their practical education. By 1974, Ward B was being utilised as a Physiotherapy Centre, and Ward F was the thriving Recreation Centre for arts and other activities. At this time there was an increasing demand for accommodation for patients with acquired brain injury – either from accidents, stroke or alcohol abuse. 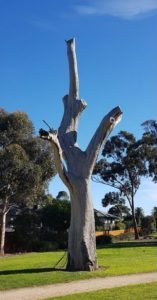 Large forked tree stump in Ernest Jones Reserve and near where Wards D, E and F were located

In 1974 Plenty Hospital was also operating Community Service Centres in Heidelberg (about 100 patients) and Healesville (about 50 patients). This Out-Patient service was becoming a significant part of the work, and was a prelude to the complete closure of the Hospital complex at Mont Park, Larundel and Plenty by 1994. In 1991, Plenty amalgamated with Mont Park and Larundel Hospitals to become the North Eastern Metropolitan Psychiatric Services (NEMPS).

Very little remains of the Plenty Hospital complex which served as a caring facility for thousands of older patients with mental health problems. Kingsbury Gardens (see photograph) served as the Female Convalescent Ward D for many years, and the apartments on Ernest Jones Drive (see photograph), were Wards E and F, the very first buildings designed as the Laundry Workers Ward and Laundry (1913). No trace remains in this vicinity of the other 10 wards, the railway line, the residences, or the other specialty buildings. 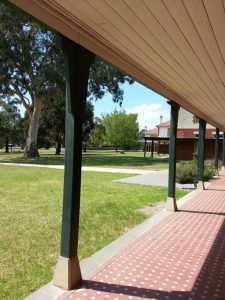 In contrast, the Mont Park Hospital and Larundel Hospital areas have several Heritage buildings, preserved and fully utilised. See the Heritage Walks section of this website to get more of a feel for the extent of this historic area (https://www.montparktospringthorpe.com/heritage-walks/ ).

Contributed by Kathy Andrewartha (2020), with thanks to Laurie Reid.